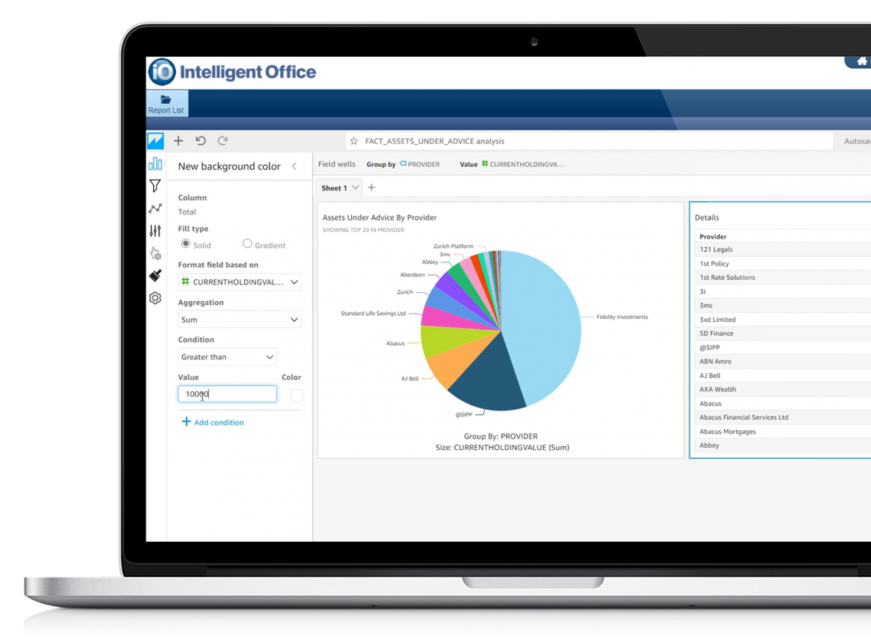 Enhanced platform integration capabilities and use of leading–edge Amazon technology to support a new management information suite were among the significant announcements from the largest player in the UK practice management system market this morning. The Change the Game events have long been when Intelliflo users learn what they can expect to be seeing soon and today’s digital conference is no different with a whole raft of new features and enhancements being announced.

Probably the most significant of these are the new platform integration APIs. These cover a variety of functions including account opening, quote & apply, bulk valuations, transaction history and income statements. Notably the Hubwise integration is already live with other platforms at various stages of development.

Deeper and more effective integrations between various platforms and the Intelligent Office platform  bring very real value to advisers. The challenge will be how warmly will these opportunities be embraced. In truth many platforms would really prefer that advisers stuck to manually entering data on their screens rather than being able to take advantage of real integration.

There is an obvious parallel to be drawn between this initiative and the Model Portfolio store that was announced at last year’s Change the Game events. At this time the only other model portfolio providers supporting the store other than Intelliflo owners Invesco are Sparrows Capital who added their SCore MPS to the platform in May. 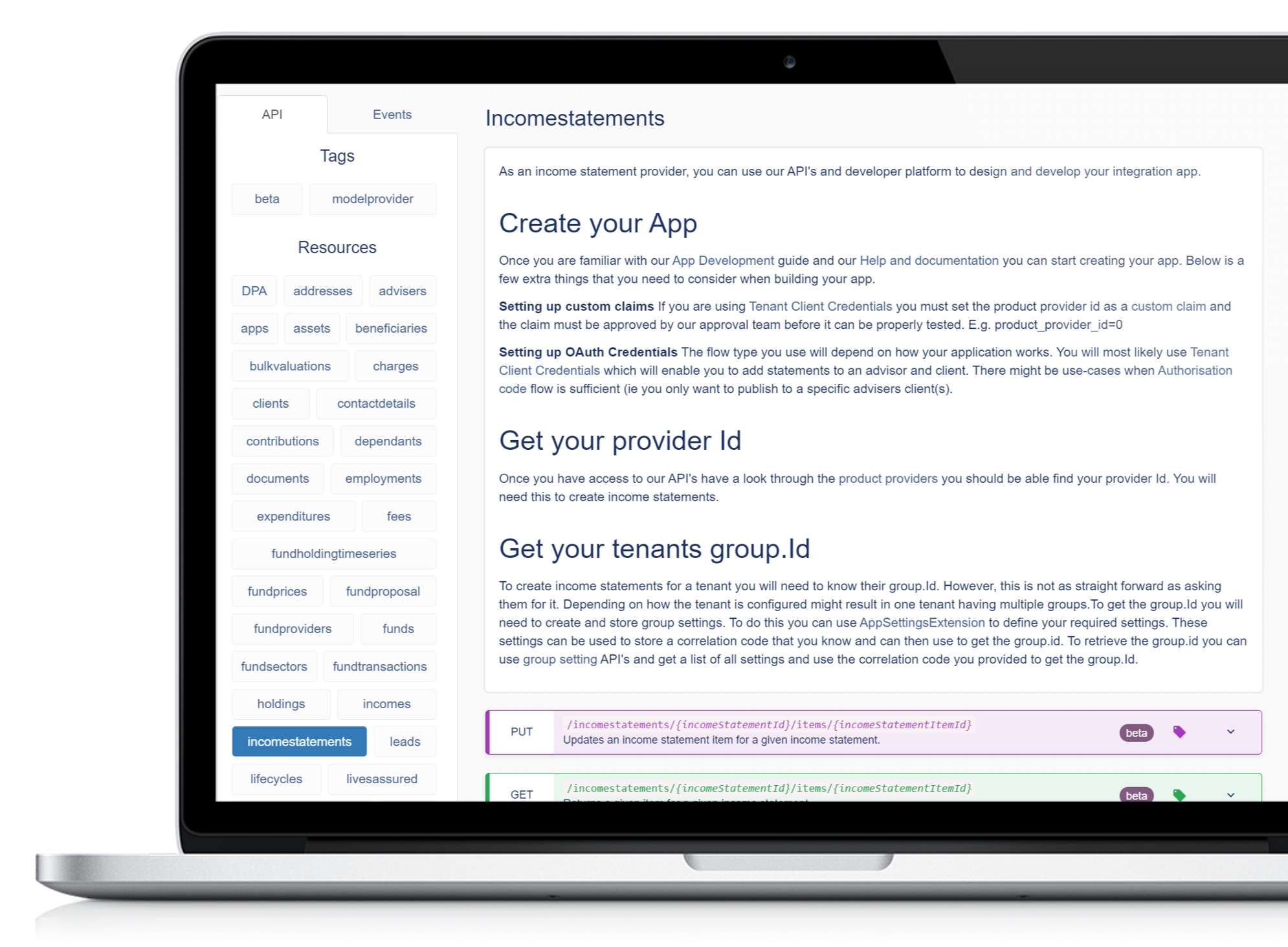 Platforms being slow to embrace these features may be a dangerous move. Hubwise, whose primary objective is to disturb larger platforms, have already got the account opening and quote and apply APIs live while Aegon have implemented the Bulk Valuation, Transaction History and Income APIs. I expect the disturbance platforms to be the organisations that will most quickly embrace these opportunities which offer them the ability to differentiate their services over some old, slow moving, larger platforms. It will be fascinating to see who the leaders and laggards are in this respect, there is a real opportunity for some of the old guard to show how nimble they can be.

These API integrations can bring huge benefits to advisers in reducing the need for manual data entry, with the inevitable errors that will happen from time to time and overall streamlining of processes. If I was an Intelliflo user, I would be demanding clarity from my main platform partners around when they will go live with each of the different APIs. If platform partners don’t give a clear commitment to implementation dates it might be a good time to consider a due diligence review.

It feels to me like the obvious time to look for implementation would be no later than Q2/2021 when the new platform to platform re-registration rules can be expected to bite. 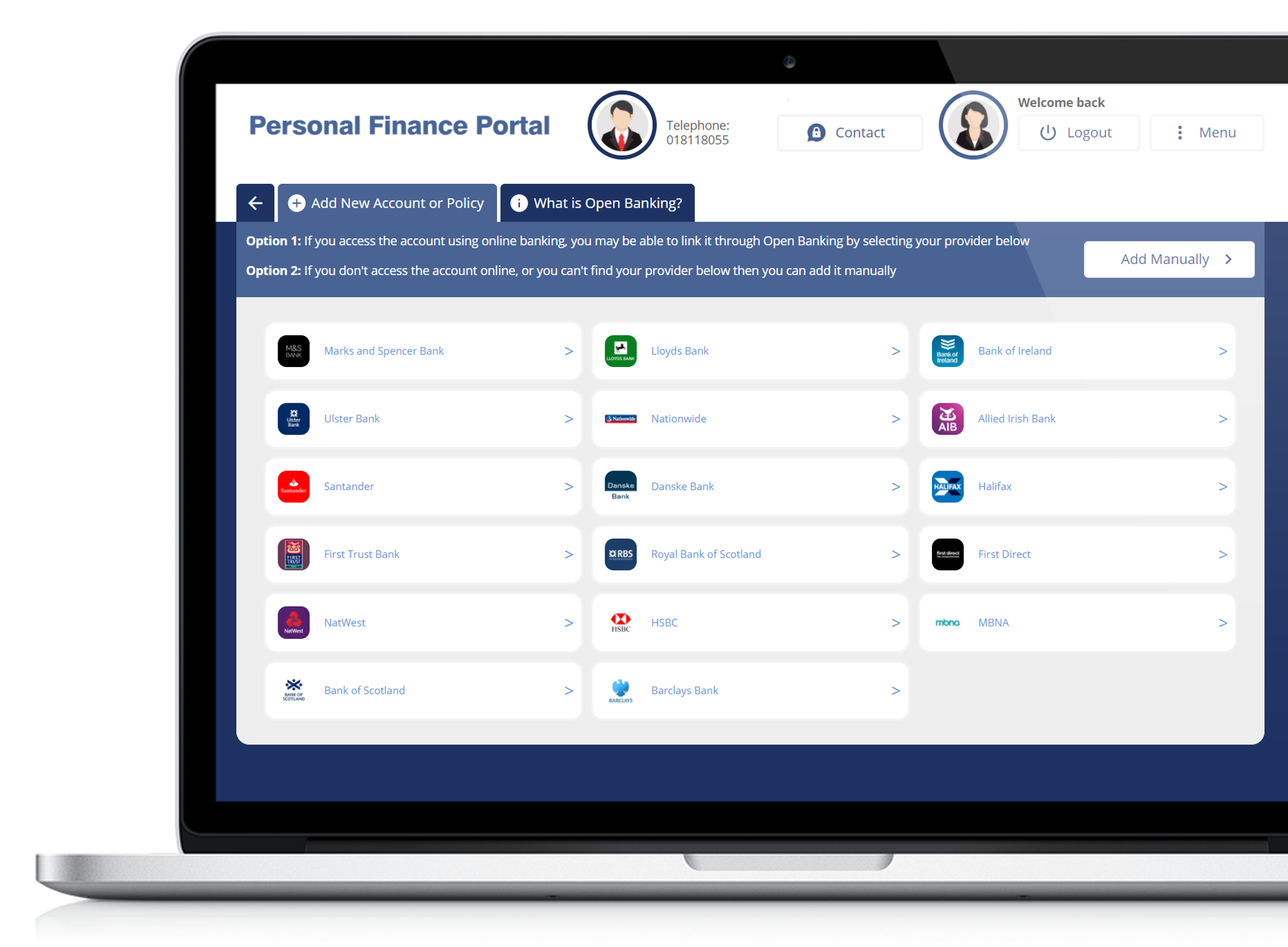 Another valuable service that is already live is The Open Banking integration into Intelliflo’s Personal Finance Portal, the client facing part of the software. In the two months since this was launched 20% of firms who use the client portal have taken advantage of the open banking integration and as a result over £30 million worth of assets that were “held away“, i.e. investments that the client had that had not been placed with or notified to the adviser,  have been identified.  In the US billions of dollars of assets are regularly identified by advisers in this way so this is another important way advisers can grow their assets under advice.

In addition, three further significant developments were demonstrated currently intended to be delivered in Q1 2021. Each of these focuses on important improvements to functionality and usability for existing customers.

Under the new service users will be able to build their own dashboards, charting, exports, scheduling, filters, drill downs, and transform data into easily understandable insights. It’s important to point out that while phase 1 is slated for Q1 2021 the full service is being delivered in four phases with the last arriving in Q3. 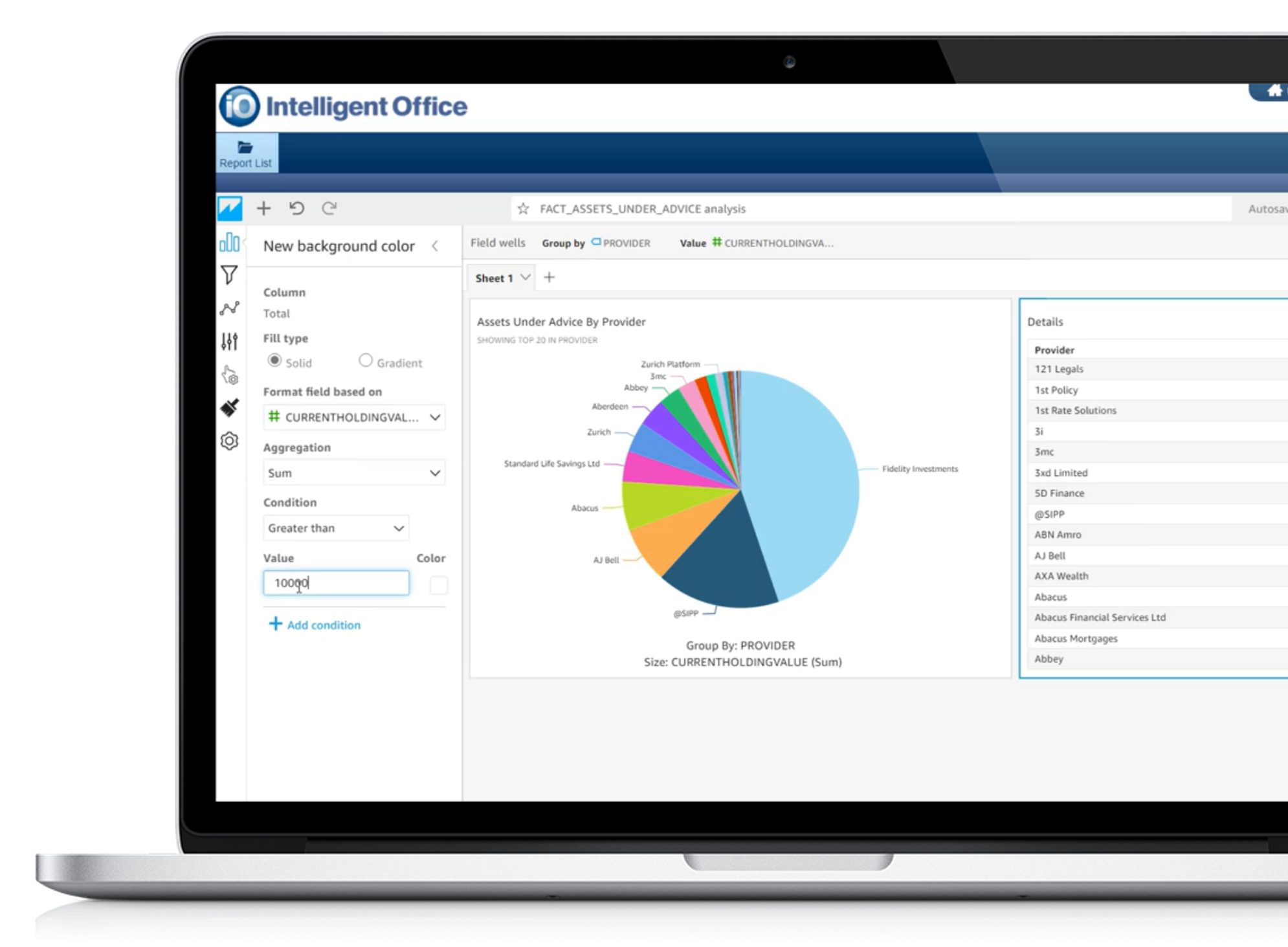 Significant enhancements are also being made to the i4C cash flow planning software Intelliflo acquired 18 months ago although nothing was said at the event around when this would be integrated with the Personal Finance Portal, I see a huge win by bringing the two together so I hope that will take place at some point in the next 12 months.

Intelliflo are also working to deliver a new look and feel to the system early next year. The company have worked with a  number of existing users to design this. The top menu is being moved to the side and the new interface has been designed to reduce the overall number of clicks required to do anything as much as possible.

The announcements above mean that Intelligent Office users have a lot to look forward to in 2021. If the company can deliver all of the above I see no reason why they won’t continue to be the leading practice management system in the adviser market. 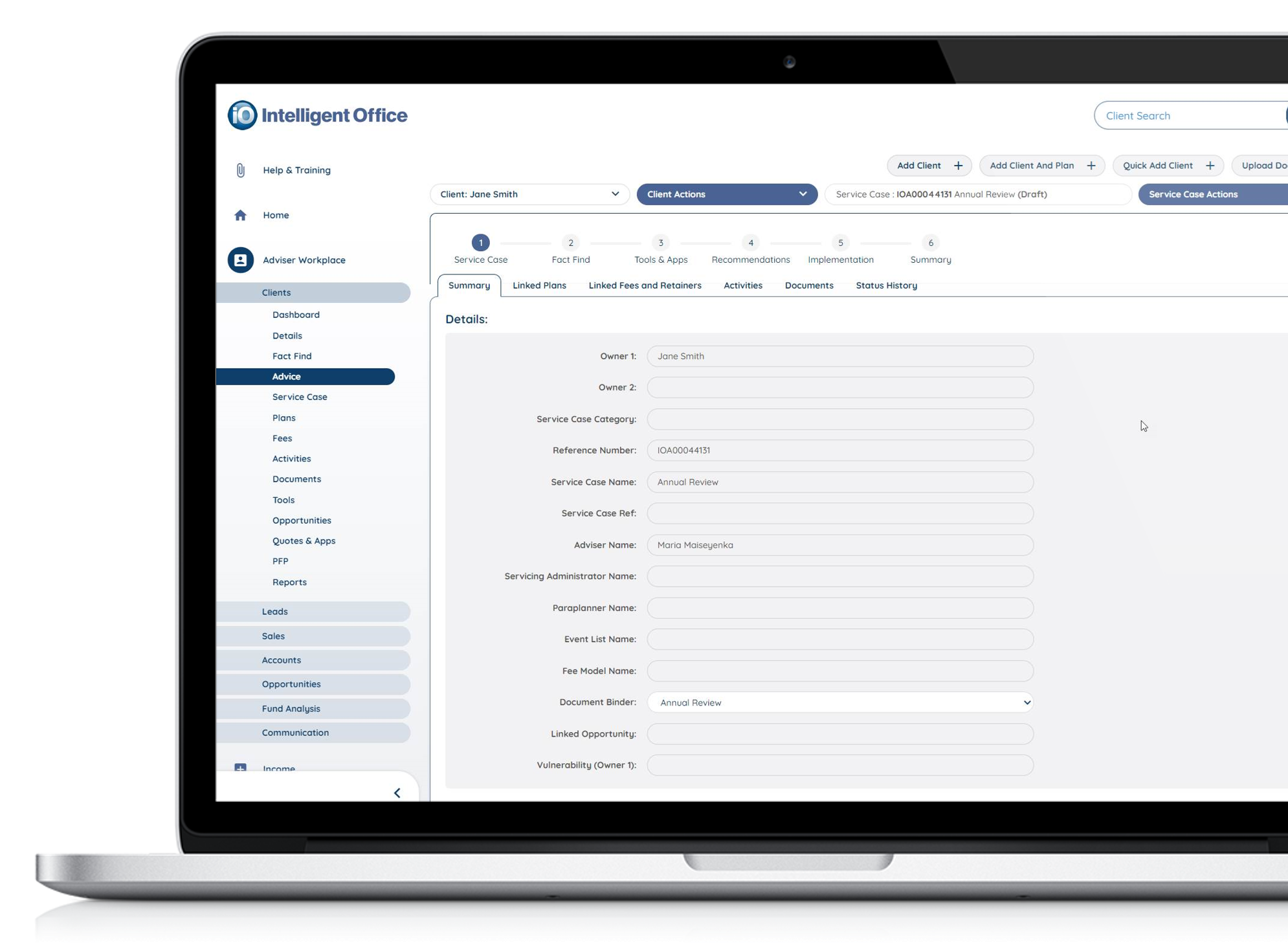 When a single supplier has a 37% market share across our industry it’s a reasonable assumption that research they carry out across that user base will be a good proxy for industry attitudes overall. The results presented at Intelliflo’s digital Change the Game conference this morning therefore provide valuable insight into how the advice community is dealing with this most difficult of years.

The study in April which received over 500 responses highlights the three main concerns from advisers as staying connected with clients (45%) completing business (38%) and navigating market uncertainty (37%). Looking at how firms expect to adapt in the future over 2/3rds (68%) expect less face-to-face communication with clients and well over half expect both greater efficiency through increased adoption of technology (59%) and staff to work remotely more frequently (57%). Exactly 50% responded that technology has played a more prominent role in their day-to-day operations post Covid. If anything, I find that last figure rather low, especially when considered in the context of increased use of various parts of the Intelliflo proposition over the seven months to September this year compared with the same period last year. Use of the Glia online meeting and co-browsing software has increased by an incredible 95 times. Use of the DocuSign digital signature capability has increased 16-fold and the client Personal Finance Portal three-fold.

As it was already also identified that one in three sessions on the portal are now conducted using a smart phone this means that phone-based use alone now is equivalent to all use last year. Another 7% of usage is by tablet so desktop usage is  now just under 60% I’m not at all surprised by this, it reinforces my view that the mobile device will be the most important place to put client data going forward, driven not least by the growing adoption of Open Banking, of which more later.

Another notable change is the dramatic swing towards digital support of Intelliflo users with that facility having increased from around 15% of support calls in January to nearly 50% by October. This is an area where I would expect to see quite a significant demographic divide. Even as a tech evangelist, I am a digital immigrant, i.e., there were no computers in schools during my education and personally I prefer telephone support. Digital natives however i.e., people who have grown up with the ubiquity of technology will I’m sure be far more comfortable, and indeed probably prefer on-line Support.

To be fair looking at the service levels delivered there does seem to be a strong case for using the digital option as it benefits from a significantly higher (36%) same day closure of support enquiries. The company report an 18 second average response time to digital support enquiries with an average satisfaction score of 4.6 out of five. When a number is this good it makes me think it probably is worth those of us who prefer telephone support to at least trying to take advantage of this capability. 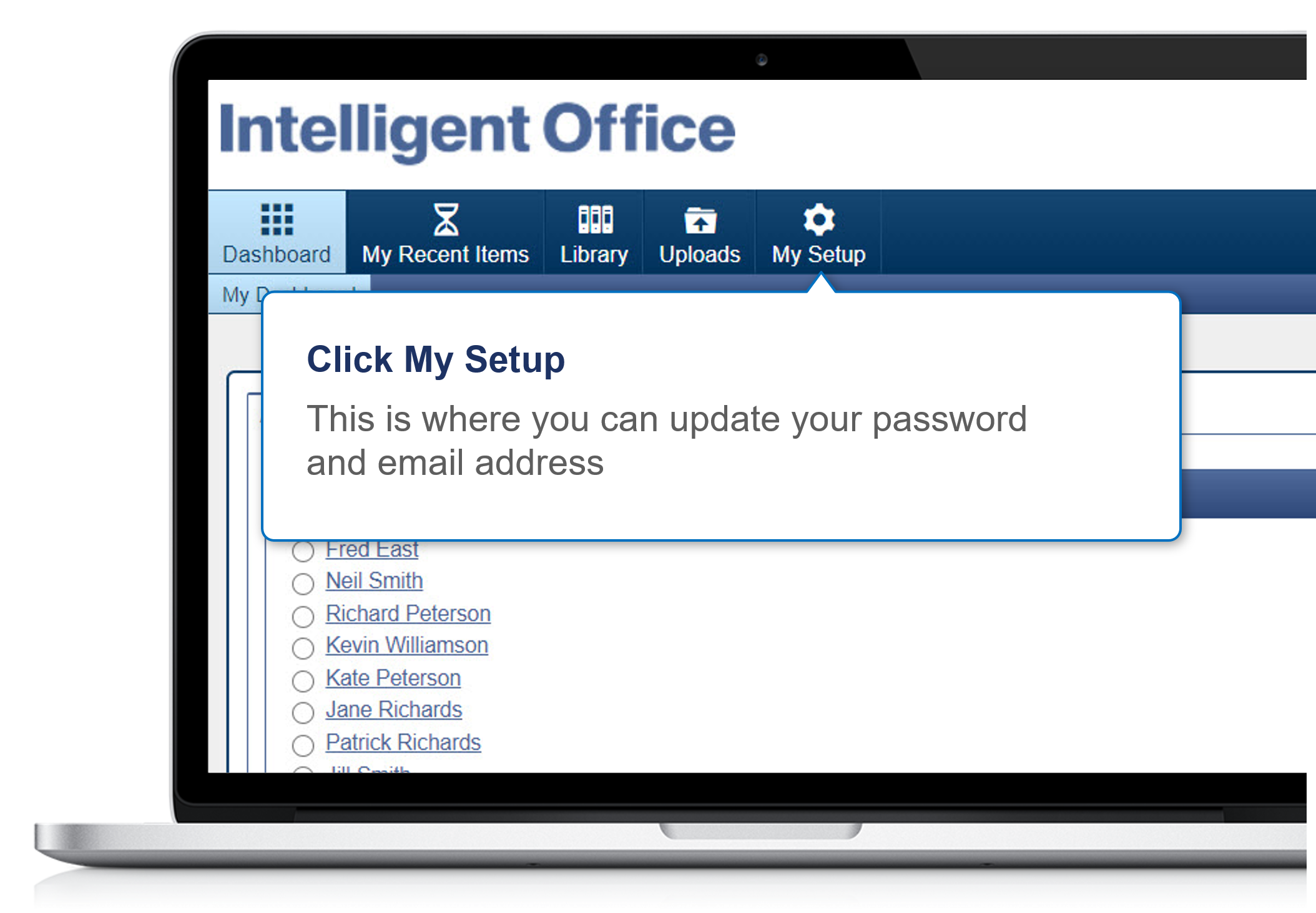 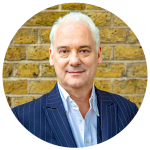 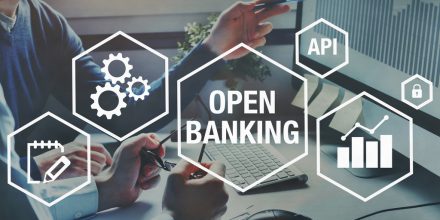 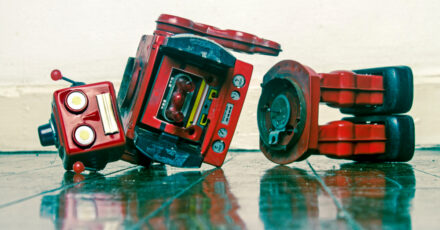 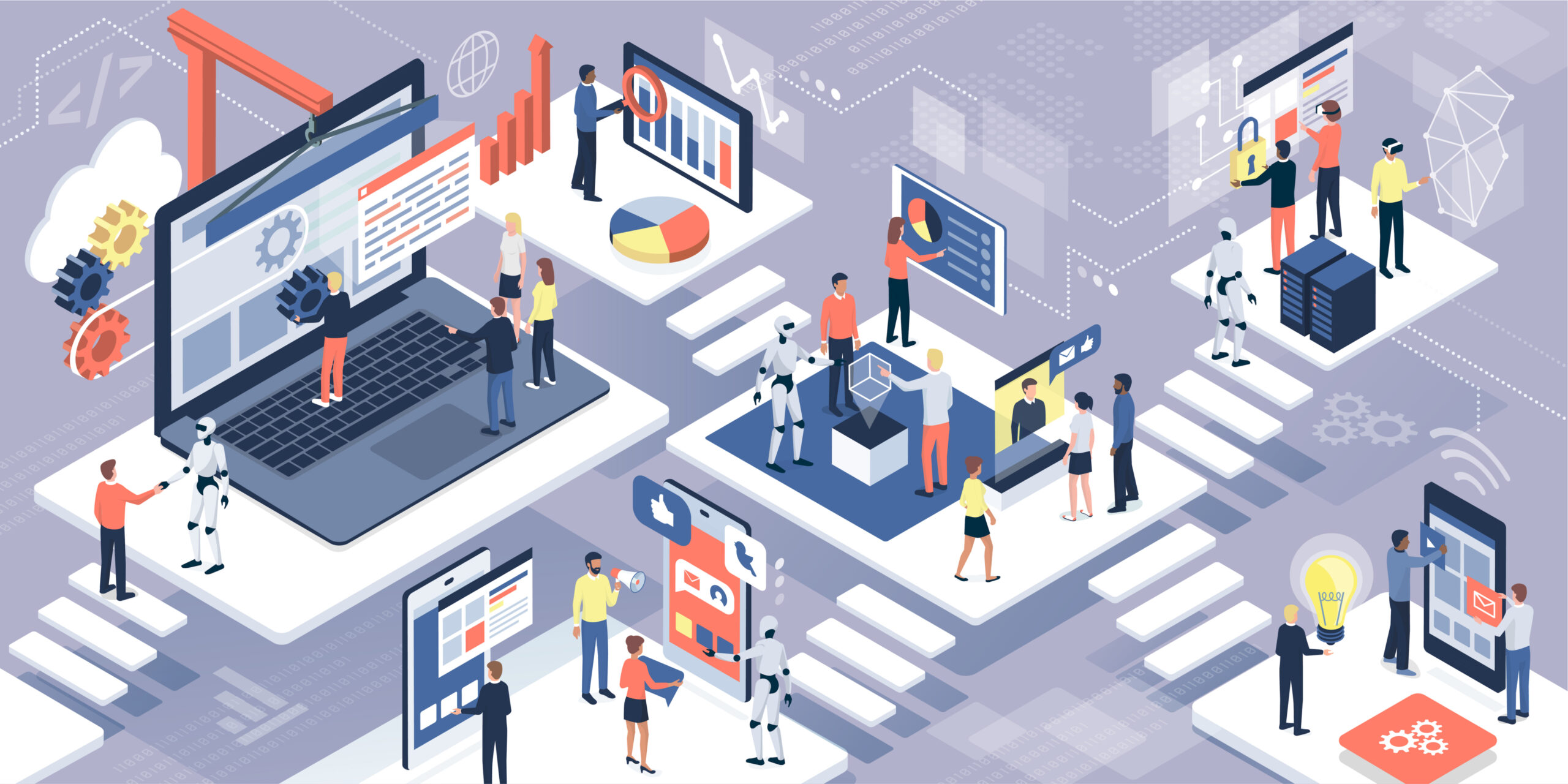 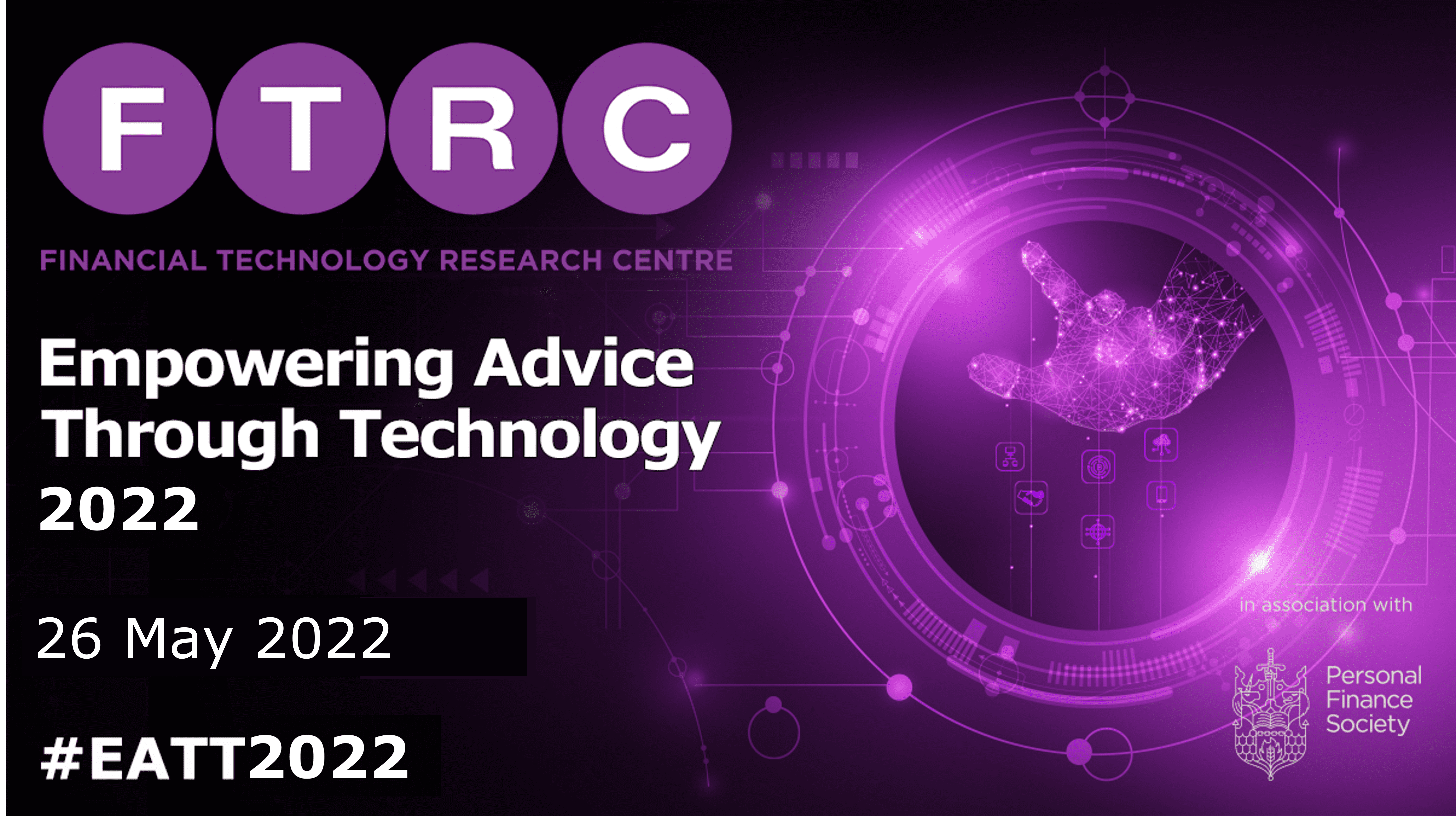 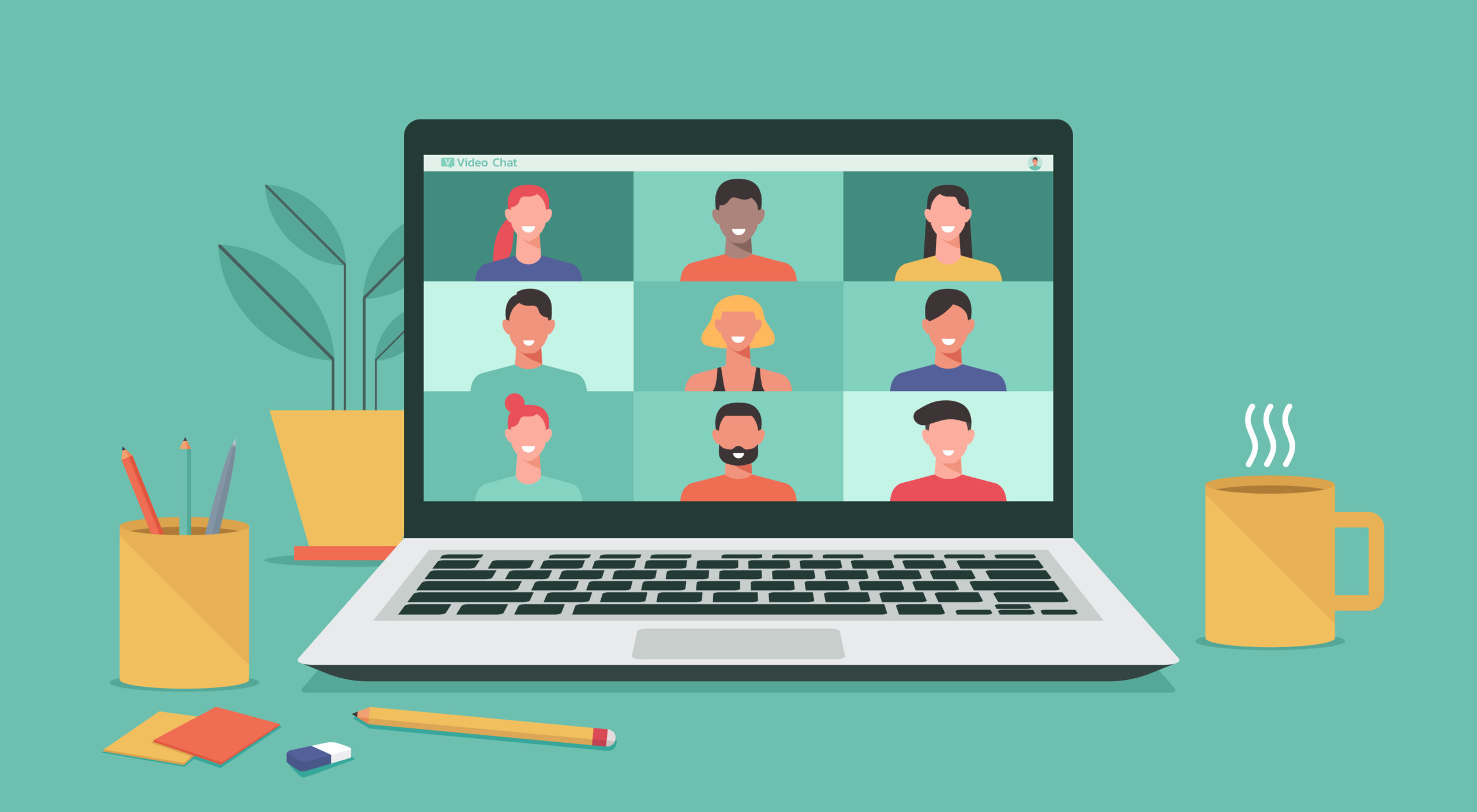 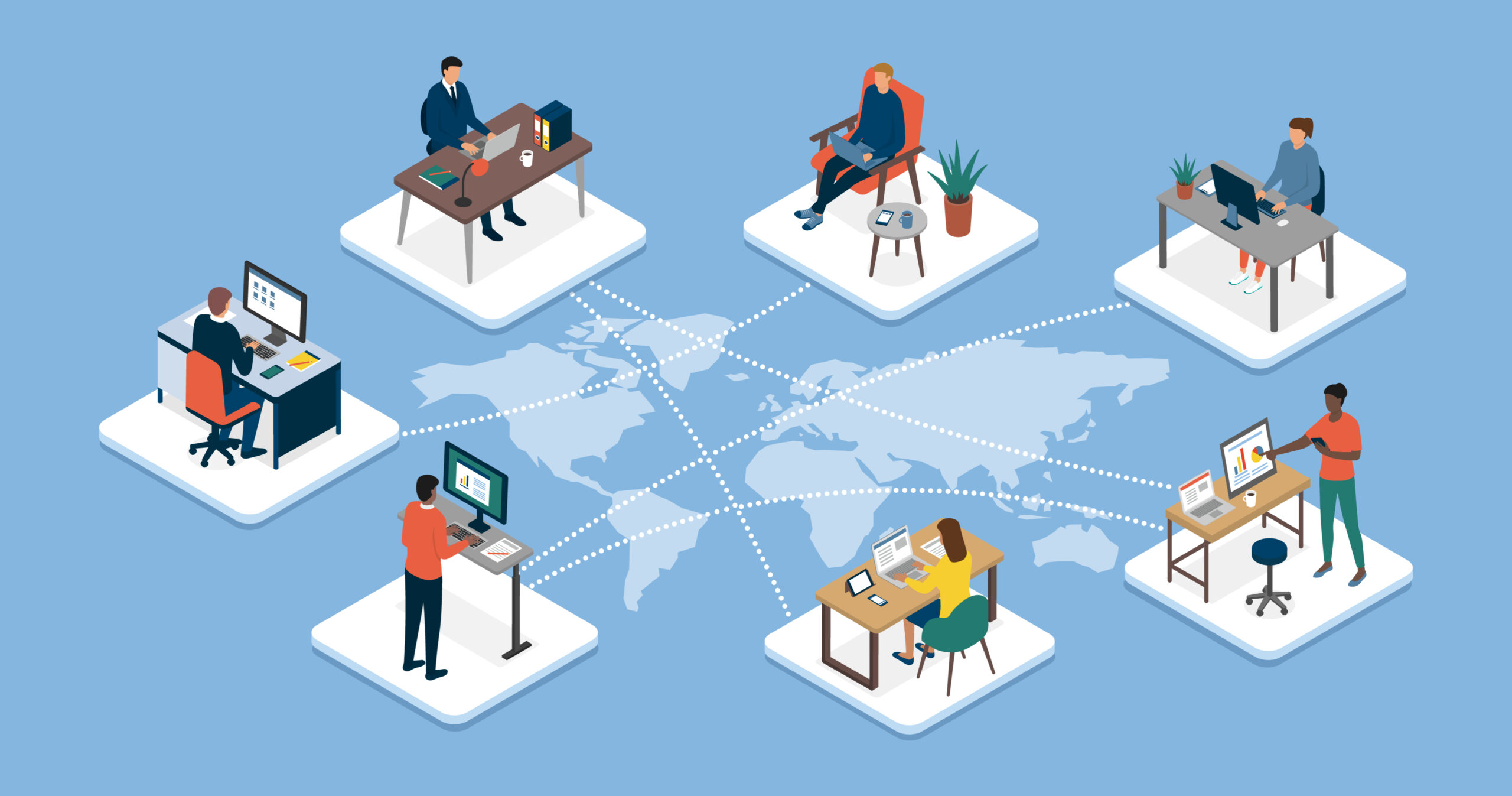